September 6, 2018 By Lilit Penrod No Comments

Ah, the Flameout. While Sabos’s (RIP) favorite drink has made it into a few different episodes this drink is originally from the Extended Universe (or Legends). It has been described as “producing sensations similar to a scalding of the tongue and a freezing of the throat”.  After a bit of thinking we decided on a variation of a Moscow Mule, with the spice of pepper and the bite of ginger to “scald the tongue” and the cooling effect of mint to “freeze the throat.” 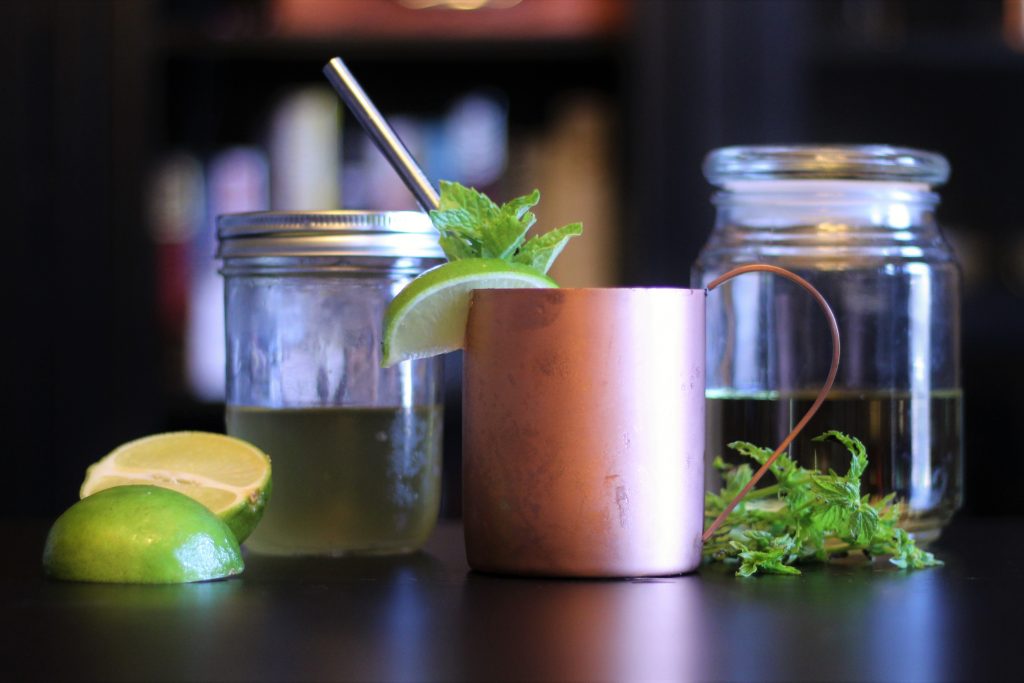 Flameout in a copper mug, with garnishes

This drink is spicy. This drink is intense. This drink is… not for the faint of heart. It combines a pepper infused vodka, a ginger-mint syrup, and ginger beer to create a truly unique drink. While some of the squadron actually enjoyed the flameout, others declared it “heinous” and “an affront to nature.” Whether you enjoy this drink depends entirely on how much you enjoy high spice levels and strong flavors.

This drinks involves a bit of prep to make properly. First, the Serrano Infused Vodka: serrano peppers are cut in half and left to sit in vodka for at least 24 hours, but up to a week. How long you let them sit will directly affect the heat level. We wanted to try the Flameout at its most intense, so we let it infused for a full 7 days.

The infused vodka could, realistically, be made with any pepper you have on hand, but we preferred the brightness of serranos.

The Ginger Mint Syrup is a little more involved than other syrups we’ve featured in the past, but it’s still incredibly easy. Ginger and water are combined in a saucepan. When it begins to boil, sugar is added. Once the sugar is dissolved the mint is added and removed from the heat. After 12 hours the ginger and mint are strained out, leaving a delightfully strong simple syrup.

Pour the vodka and syrup into a copper mug or rocks glass. Fill with ice and pour in the ginger beer.

Combine in a glass jar and let sit for 24 hours up to 1 week. Strain out the peppers and store in an airtight container.

Add ginger and water to a saucepan over high heat and bring to a boil. Add the sugar and stir until fully dissolved, about 1 minute. Add the mint. Remove from the heat. Let sit for 12 hours. Strain before using.